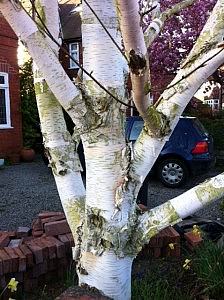 The other evening there was a knock at the door. Outside was a big man with broad shoulders who informed me that the tree in the front garden needed to be pruned back and that he was the person to do it for me. Now the tree in question is a Betula ermanii which is known for its main characteristic which is particularly stunning bark which is a creamy white, tinged with the faintest blush of pink. It also has a conical crown, catkins in the spring, mid green leaves throughout the season and gentle yellow glow about it in the autumn. I love that tree. It is the first thing I see every morning and the birds sit in it and welcome the day. I love it to such an extent that we paid for a telephone engineer to come and reroute the telephone wires that ran through its crown, rather than cut it back in any way, which would have been significantly easier and cheaper to do. So there is no way that anyone was going to chop the crown of that tree off, however enterprising they may have been.

The man on my door step looked at me as though he could not believe his ears when I told him this. He went away but, unbelievably and incredibly, he came back later that same evening to speak to my husband about cutting the tree back! Leaving aside his blatantly sexist approach, it was this man’s incredulity at my refusal to chop the tree back that made me realise what really divides the true gardener from the rest of the population.

It is this:- if a plant you love, such as the case of my Betula ermanii, becomes entangled in some aspect of modern living, do you sacrifice the plant or try and find a way to save it? Obviously there are situations when the plant has to go but there are plenty of others were the plant is sacrificed just because it is the easiest, quickest or cheapest thing to do, particularly with trees. I think it is so sad to see trees that have had their heads chopped off, so to speak. It looks brutal, impatient and aggressive. Many a time, it would be perfectly possible and practical to have come up with a slightly different design which accommodates the plants, if they were there first or to think about the mature size of the plants before planting them within the urban or city environment, thereby showing a little forethought and imagination.

So when you decide that a plant has to be moved, how much effort are you prepared to put into recycling the existing plant? A true gardener never just gets rid of a plant without either using it elsewhere, giving it away or at the very worst, composting it.

If I’m honest, my lovely Betula ermanii was planted in the wrong place by the people who owned the house before us but with a little imagination and a small amount of money, it has survived to see another day and to give me great pleasure every day.