What to do if your garden is out of control 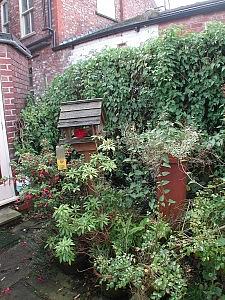 What to do if your garden is out of control? Well, I gave up on my garden about 3 years ago when it became out of control. Prior to that I had fooled myself that I could keep on top of the weeds and that a few ‘native’ plants were beneficial to the wildlife but then I looked at it one day and just gave up. Couch grass had infested the border, running in out of the plants’ roots and Convolvulus was suffocating anything it could – which was everything.  The fence was old and rotting, the boundary hedge was overgrown by many feet, robbing the garden of light and the small pond was dank and overgrown with common sedge. Brambles had invaded the end of the garden and the lawn was more of a moss-fest than anything else. All in all, not a nice place to be in and very depressing to look at.

My solution to my out of control garden was to do nothing. Unsurprisingly, the situation got worse and the more it did so, the less I felt inclined to do something about it until a friend of mine took pity and offered to help me sort it out.

Stop spending more energy on it.

If you and your garden are in the same out of control position I found myself in, the first thing to do is not to spend any energy on being embarrassed about it or blaming yourself for the state it is in. The second thing is to get used to the idea that, if at all possible, that you need to start again, from a clean slate.

In an ideal situation, the only sensible option you have at this point, for the sake of future sanity, is to take everything out and begin again. It took me at least 6 months to get used to the idea and another couple to actually get started on it so don’t be alarmed at the amount of time it might take you to make the decision. At first I wanted to keep all the plants to use again but it was pointed out that I would also be keeping the couch grass and the convolvulus too, being the very reason I was having to take such drastic action, so with reluctance I put all the plants into the municipal green bin for the council to compost.

Progress brings momentum. Once the project got underway and it was possible to see a little improvement, it didn’t feel too bad to get rid of plants and as the work progressed, it became enjoyable and fulfilling to see how much had been achieved.

With the garden cleared of everything, except the trees and mature shrubs, it became much easier to think about it and not to mourn the wastage of the previous plants. I then put a lot of time and energy into cleaning the soil of weeds, roots and other debris and incorporating well-rotted organic matter which gave the soil a much needed fertility boost. Now, instead of being sad about the plants I had got rid of, I now felt excited about the opportunities to try new plants in new combinations. All in all, I found beginning again was very liberating and you will too.

This is an extract from my forthcoming book ‘The Garden Equation. How to make your garden be a delightful part of your lifestyle’. If you would like to attend the book launch in November 2015 in York, please email sally@yorkshiregardendesigner.co.uk for a free ticket.